Pilsner, also known as pilsener, is a type of pale lager named after the city Pilsen (Plzeň) in western Bohemia. It was invented by the Bavarian brewer Josef Groll in 1842. He launched the Pilsner Urquell, the world’s first blond lager, and it became a huge success. 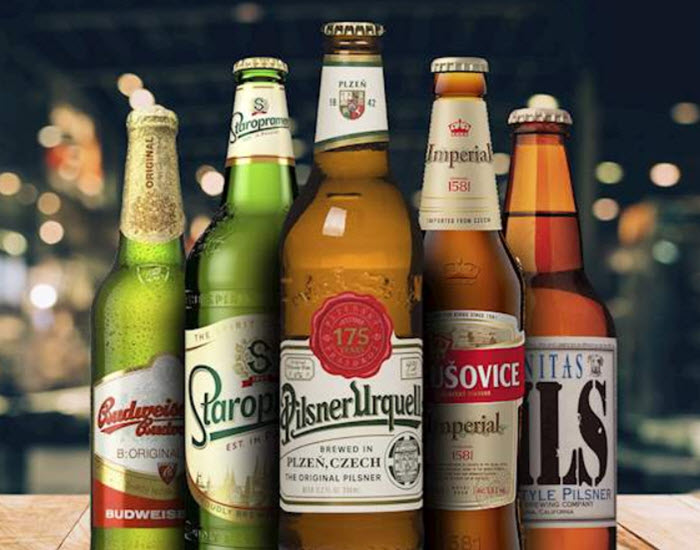 Many of the huge macro-breweries produce pilsner, but there is also a big interest in pilsners among nano- and macro-brewers, especially in Europe and North America.

This type of pilsner is comparatively bitter. The taste is often described as earthy. The colour is light straw to golden. Examples of pilsners in this category are Wernesgrüner, König and Flensburger.

This pilsner has a lighter flavour and is known for its high foaminess. The colour is golden. The original Pilsner Urquell falls into this category, alongside later products such as Staropramen and Kozel.

This is a broad and heterogeneous category, and some of the beers in this group aren’t even produced from barley malt. Famous macro-brewery beers such as Stella Artois, Heineken and Grolsch are categorised as European-style pilsner.

On the western coast of Canada, the most common type of pilsner is a hoppy lager-like one.

Imperial pilsners made in the U.S.

These pilsners are known for their robust maltiness. Compared to the German-style and Czech-style pilsners, they are darker and sweeter, and come with hints of spiciness.

When Josef Groll created his Pilsner Urquell, most Bohemian beers were top-fermented. The area was also experiencing some serious trouble with low-quality beer, and some of the beer sold was so horrible that angry consumers had resorted to dumping whole barrels to signal their disapproval.

To manage the situation, the city of Pilsen founded a city-owned brewery in 1839 and decided to brew high-quality beer in the Bavarian style. To this end, they hired the Bavarian brewer Josef Groll.

Groll, who was familiar with new brewing techniques and wanted to utilize brighter malts, presented his first batch of pale lager on the 5th of October 1842. It was made from hops grown in nearby Saaz (Žatec), combined with bright malts and the unusually soft local water available in Pilsen. After having the brew go through Bavarian-style lagering, Groll could present a clear, golden beer with an astonishing flavour profile.

Around the same time, improvements in glass manufacturing in Europe had caused the price of glass to drop. For the first time in history, you didn’t have to be fairly well-off to drink your beer out of translucent glass. This, in turn, meant that the colour of beer became more noticeable for the consumers – and this served to increase interest in the beautifully clear and golden Pilsner Urquell.

By 1853, there were at least 35 pubs in Prague that served Pilsner Urquell. Three years later, it went on sale in Vienna for the first time, and in 1862 it reached Paris.