Trappist beer is brewed by Trappist monks. This is a Catholic order that originated within the Cistercian monastery of La Trappe in France in the 17th century. Trappist beers are mostly top-fermented and mainly bottle conditioned. 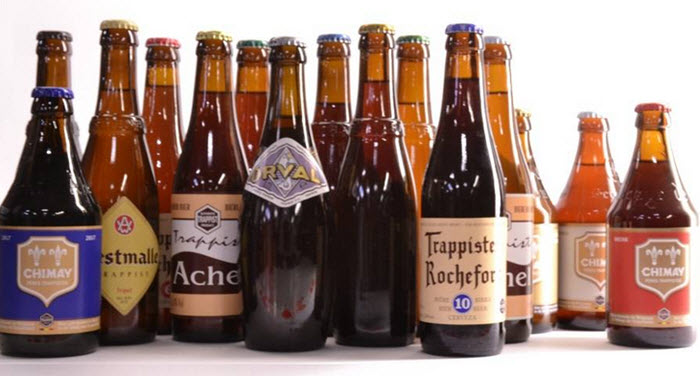 At the time of writing, fourteen Trappist monasteries are producing Trappist beer recognized by the International Trappist Association. Six of them are located in Belgium, two are in the Netherlands, and the other six are in France, England, Austria, Spain, Italy and the United States, respectively.

Some of the Trappist monasteries where beer is made allow visitors, who are welcome to taste the beer and buy it directly from the monastery. The main part of the monastery is typically off limits to beer tourists, so the beer tasting takes place is a designated area such as a vistor’s center. Brouwerij de Koningshoeven in Koningshoeven Abbey offers not only beer tastings but also tours of the old brewery and the current bottling plant at the abbey in Berkel-Enschot in the Netherlands.

There is a special system in place to categorize trappist beers based chiefly on the amount of malt and the original gravity. The categories within the system are Enkel, Dubble, Tripel, and Quadrupel.

The word enkel means single, and trapist beer belonging to this group is brewed according to the basic recipe for trappist beer. This is the lightest type of trapist beer. For a long time, this was the beer intended for the monks themselves, and it is therefore also known as Patersbier (Father’s beer).

Two examples of enkel beer available for sale are Dorée by Chimay and Extra by Westmalle.

A type of beer brewed in Westmalle’s Trappist Abbey in 1856 is the origin of this type of trapist beer. The Westmalle Dubbel began highly popular and many other abbeys launched their own dubbels.

A dubbel is a fairly strong brown ale with an ABV in the 6-8% range. The body is rather heavy, the bitterness is understated, and there is both cereal character and pronounced fruitiness.

Tripels tend to have an acohol content in the 8-10% ABV range. For many trappist breweries, this is the strongest beer they make. Westmalle Triple, which was developed in the 1930s, is considered the origin of this style of trappist beer. Westmalle Triple goes through a long secondary fermentation before being bottled with a dose od sugar and yeast.

Other examples of tripels are La Trappe Tripel and Chimay White/Cinq Cents.

When Koningshoeven launched a beer that was even stronger and darker than their tripel, they consequently labeled it quadrupel. Another example of a trapist beer that belongs in this category is Rochefort 10 from Brasserie de Rochefort.